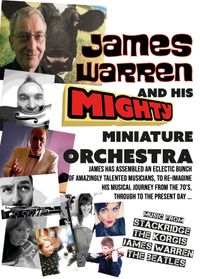 Way back in the 1960’s when love was all around and The Beatles were fab, a young James Warren took up the guitar. His ‘silent admiration for the boys in the Beatle boots’ soon gave way to a band called Stackridge. The music was heady, wayward and like nothing else. A dream came true when their 3rd album ‘The Man In The Bowler Hat’ was produced by none other than George Martin – his first production after the Fab Four. Out of the smash hits of The Korgis through to the eclectic solo albums of James Warren, always with a strangely compelling mix of psychedelia, love songs and some other odd things(!) emerged the idea for a new show. An amazing journey would need an amazing band! – WE HAVE ONE! James Warren - Vocals/Acoustic guitar/bass, Al Steele - Guitar/Vocals/Keyboards/Bass/Percussion, Richard Mainwaring - Violin/French Horn/Vocals/Trumpet/Bass/Percussion Pete Wilson-Keyboards/Clarinet/Sax/Vocals/Percussion. As if that is not enough(!) we will be augmented by a fabulous 5-piece string section! SO!.. get your loons out, dust off your paisley shirt, and come take a trip that begins in the 60’s and ends up… well, wherever we end up, we hope to find you at the other end!